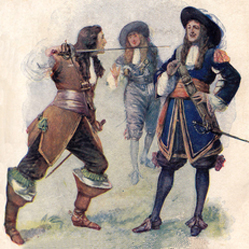 The sequel to Twenty Years After is titled Ten Years Later and consists of 288 chapters, which is divided into three parts.

Part 1 is titled "The Vicomte of Bragelonne" and begins with the retirement of d'Artagnan, still a Lieutenant, after 35 years of service.

Perceiving the young King Louis XIV to be weak he finds employment in assisting Charles II to retake the throne of England. After returning to France he is persuaded by King Louis to undertake a mission, for which he will be made Captain of the Musketeers.